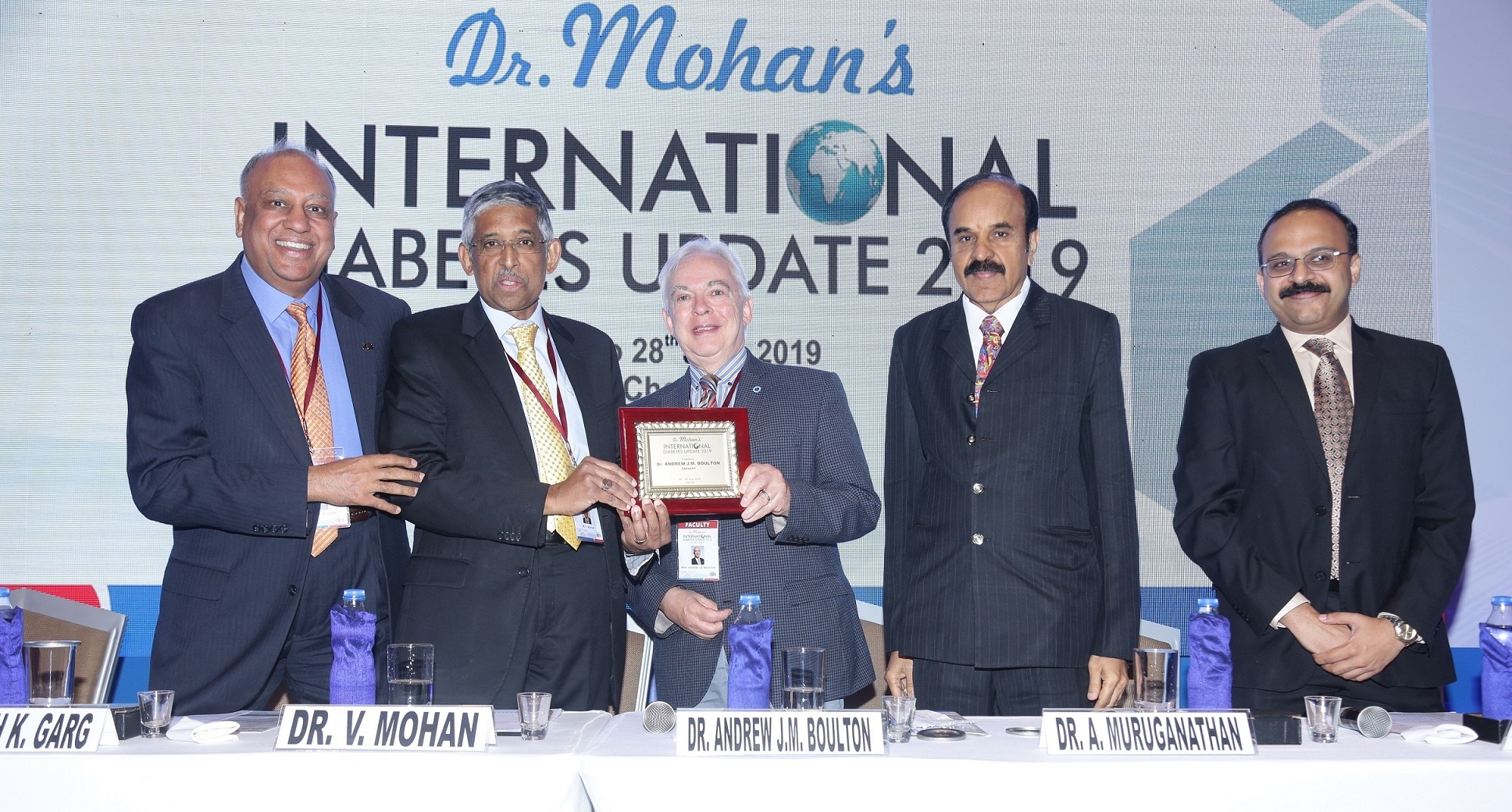 Renowned for its pioneering practices in Diabetology, Dr. Mohan’s Diabetes  Specialities Centre today launched first – of – its – kind minute dance routine,  THANDAV, at the 6th edition of its annual flagship conference,  International Diabetes Update. Aimed at Promoting  physical activity as preventive measure for obesity and diabetes amongst Asian  Indian adolescent girls, THANDAV (Taking HIIT And Dance to Adolescents  for Victory over NCDs) was curated and inspired based on the Indian dance  forms, as a unique regimen to combat NCDs (Non Communicable Diseases)  through a culturally sensitive physical performance.

Attended by a record number of over 3000 doctors from across India, the  three day conference was inaugurated by the Chief Guest Dr. Andrew J. Boulton, President – Elect, International Diabetes Federation in the presence of Dr. Satish K. Garg, Professor of Medicine and Pediatrics & Director of  Adult Diabetes Program, Barbara Davis Center for Childhood Diabetes, Colorado, USA – Dr. A. Muruganathan, Governor, American College of Physicians (ACP), India Chapter and other renowned practitioners from the field of Diabetes Management.

Currently in its 11th year, Dr. Mohan’s Education Academy conducts the  annual International Diabetes Update with an aim to increase awareness  and update knowledge on basic epidemics of diabetes. This year for the  first time, the update is being organized in collaboration with ATDC  (Achieve Targets in Diabetes Care ) of the Barbara Davis Center for  Diabetes, Denver, Colorado, USA and is supported by American College of  Physicians(ACP), India Chapter.

Commenting on the occasion, Dr. V. Mohan, Organizing Chairman of the  Diabetes Update and Chairman, Dr. Mohan’s Group of Diabetes  Institutions, said “Over the past five years, Dr. Mohan’s International  Diabetes Update has earned its place as the most awaited event on diabetes  in India. Year on year, the conference helps enable physicians with the  latest knowledge in the field of diabetes management for an improved  assistance to patients. The main aim of the Diabetes Update is to help  clinicians and scientists to keep abreast with the latest advancements in  diabetes prevention and management. This year, the 6 th edition of the  Update includes eminent line-up of International & National Faculty who  will provide a wonderful academic feast.”

Dr. R .M. Anjana, Member Organizing Committee and Managing  Director, Dr. Mohan’s Group of Diabetes Institutions said, “Scientific program of the Update will take place over  three days, featuring high – level speakers from India and rest of the world. We have a special women  centric workshop on “Diabetes and the importance of lifestyle modification”. This workshop will enable participants to keep abreast of  the latest information on the link between dietary patterns and physical  activity and their significant impact on metabolic health and diabetes. In  addition, for the first time in India, the workshop will showcase a culturally  sensitive and appropriate high-intensity exercise regimen which  has been developed based on Indian dance forms- the THANDAV (Taking  HIIT and Dance to Adolescents for Victory over NCDs).”

Dr. Ranjit Unnikrishnan, Member Organizing Committee and Vice  Chairman, Dr.Mohan’s Group of Diabetes Institutions, further elaborated “As always, the update will bring together  the best of diabetes researchers and clinicians from all over the world to discuss topics of  general and special interest. The Update will provide unique opportunities  for diabetes professionals to share ideas, learn about significant  advancements and make important connections. Orations, lectures, themed  symposia and workshops will cover the entire gamut of Diabetology from  bench to bedside”

Dr. Guha Pradeepa, Member Organizing Committee and Head,  Research Operations, Madras Diabetes Research Foundation said, “The Update will help to tackle a broad range of diabetes  issues, from latest scientific advances to cutting – edge information on prevention, management and awareness. For this edition of the Update, more than  3000 delegates are participating and we have over 100 National and  International Faculty working in the field of diabetes contributing to the  scientific program. The scientific program has special sessions on emerging  therapies in diabetes, challenges in management, workshops on insulin,  diabetic retinopathy, gestational diabetes, panel discussions and many  others.”

This year the International Diabetes Update had several eminent clinicians  and scientists as International Faculty including Dr. Andrew J. Boulton,  Professor, Department of Medicine, University of Manchester and  Consultant Physician at Manchester Royal Infirmary, UK and President -Elect, International Diabetes Federation, Dr. John C. Pickup, Emeritus  Professor, Department of Diabetes and Metabolism, King’s College London,  UK , and the Editor of the famous Pickup’s Textbook of Diabetes, Dr. Satish  K. Garg, Professor of Medicine and Pediatrics & Director of Adult Diabetes  Program, Barbara Davis Center for Childhood Diabetes, Colorado, US and  many more. On the whole it featured a gamut of who is who of senior  diabetologists and scientists working in the field of diabetes from India and  across the globe.