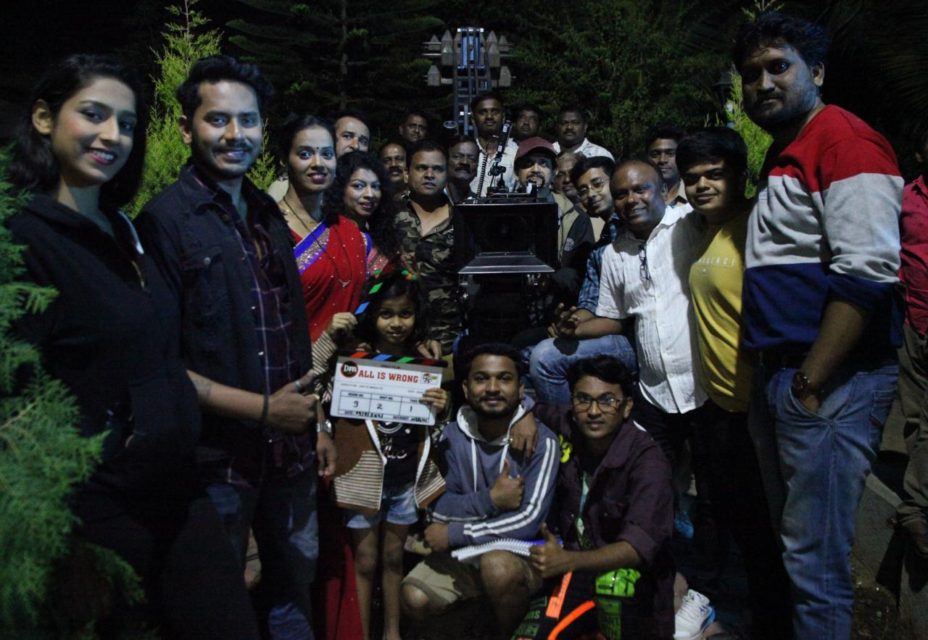 Promising to be an edge-of-the-seat thriller, ALL IS WRONG a Hindi full feature film is a riveting murder mystery that promises to offer the right dose of entertainment, glamour and mystery for keeping audiences engrossed with a suspenseful storytelling track. It is a youth-centric film which aims to give a strong message for women empowerment and underlines the fact that women are on par with men in all aspects of life.
Made under the banner of DM Films & SAM Films Entertainment, every scene of the movie has been meticulously shot to keep the audience deeply involved with the characters. Made under the direction of Datta Mirkute, a master film-maker and ace screenplay writer film Director, the movie which was launched in the first week of February 2021, will be an ongoing shoot in a start-to-finish schedule of around 24 days. The movie is planned to be released in June 2021.
The two male leads of the movie are Nikhil Sonkeshariya, Actor, Model and Entrepreneur along with Rahul Bhise. Nikhil is from Bhopal and has experience of 7 years as an actor. He has acted across all entertainment formats like TV serials, web-series, short films and movies. He has worked in popular serial Tarak Mehta ka Ulta Chashma and CID on Sony Entertainment Television. Rahul Bhise has worked in Marathi movie Prem Sankat (2016). Muskan Lalwani is the female lead in the movie. She is a young actress from Raipur, Chattisgarh who is also pursuing her BTech from Bhartiya Vidyapeeth, Pune in final year.
ALL IS WRONG has been helmed by a passionate and enthusiastic team of director, actors and crew members.The ensemble cast of the movie also includes young and talented actors Anil Mohite, Sushil Chaukekar,  Ayan Shaikh from Madhya Pradesh, Siddharth Kamble, Vishal Patil from Jalgaon, Maharashtra and Adarsh Bhat.
The movie has only one song which is an item song and will be performed by Madhuri Pawar, a renowned name in the Marathi showbiz industry and winner of Zee Yuva Apsara Aali reality show.
“With the government allowing for 100% occupancy in movie halls, audiences want to return to theatres to watch movies with great cinematic content and substance. ALL IS WRONG is a youth-centric film with a strong social message and entertainment quotient that will appeal to all age groups,” stated Datta Mirkute, Director and Film Maker.
“India has a rich culture and tradition that respects and venerates women. We have aimed at upholding that tradition through this movie. It also has an engrossing storyline that will keep the cinema audiences engaged and entertained,” stated Anil Mohite, Actor & Producer of the film.
For media queries contact-Vikram Kamble 9769776664, vikramkamble246@gmail.com