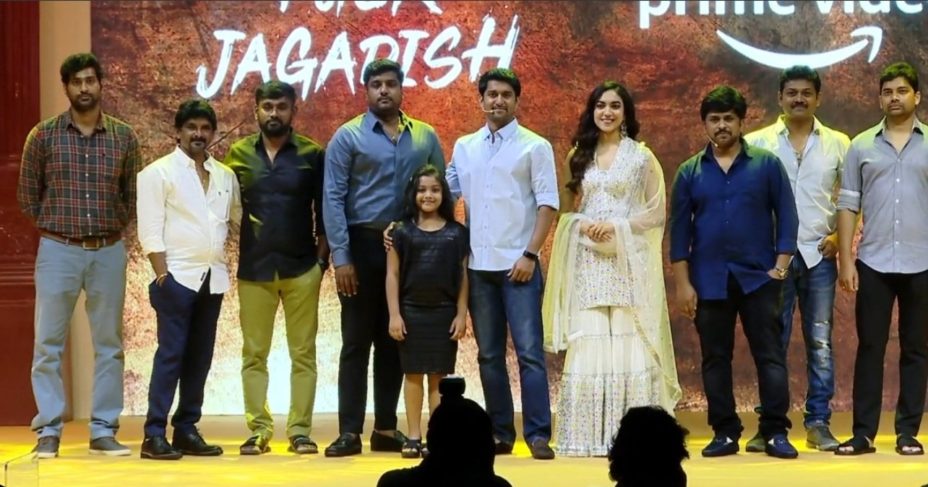 Amazon Prime Video today announced the world premiere of the much-awaited Telugu family drama Tuck Jagadish, led by the ‘natural star’ of Tollywood – Nani. Directed by Shiva Nirvana, this Amazon Original Movie is produced by Sahu Garapati and Harish Peddi under the banner of Shine Screens. Boasting of an ensemble cast, Tuck Jagadish features some prominent names from the industry including Ritu Varma, Jagapathi Babu, Aishwarya Rajesh, Thiruveer, Vaishnavi Chaitanya, Devadarshini, and Daniel Balaji. Set to premiere globally on 10th September, Tuck Jagadish will be available to audiences across 240 countries and territories on Amazon Prime Video.

Set in the tinsel town of Andhra Pradesh, the film narrates the life and journey of Jagadish Naidu (played by Nani) as he traverses through the ups and downs in his family life thereby highlighting the special bond and conflicts between siblings in his closely-knit joint family. The movie has a mixed bag of dramatic emotional moments, action sequences, and music, making it a complete family entertainer – a narrative not seen before in Tollywood.

“After the successful world premiere of V, I am thrilled to collaborate with Amazon Prime Video yet again,” said ‘Natural Star’ Nani. “On the auspicious occasion of Ganesh Chaturthi, we are bringing this heart-warming story for our audiences to enjoy with their families from the comfort of their homes. This film is very special to me and I can’t wait to share it with my fans and all the film lovers. I had a great time filming Tuck Jagadish with the entire cast and crew, and our off-screen camaraderie reflects perfectly on-screen as well. We hope that the movie will be a delight to watch.”

“Family dramas have an intrinsic feel good factor and Tuck Jagadish promises a delightful journey of an inseparable bond that surely will strike a chord with the audience,” added Director Shiva Nirvana. “And there would’ve been no better actor than Nani to play the titular role in the film. I am looking forward to the global premiere of Tuck Jagadish across 240 countries and territories on Amazon Prime Video. With Nani headlining the film along with a stellar cast, I sincerely hope it garners a positive response from audiences world over.”

“At Amazon Prime Video, we strongly believe that local stories have the potential to become global blockbusters and Tuck Jagadish is a great example for that. I’m sure this family drama, which presents a beautiful mix of heartfelt emotions, comedy and action, will resonate with audiences around the world,” said Vijay Subramaniam, Director and Head, Content, Amazon Prime Video, India. “At Prime Video, we are working to build deep libraries of local language content, and Tuck Jagdish is a treat especially curated for our Telugu movie loving audience. We are happy to have found our trusted partners in Shine Screens who have brought to life this heart-warming story led by an incredible cast and crew.”