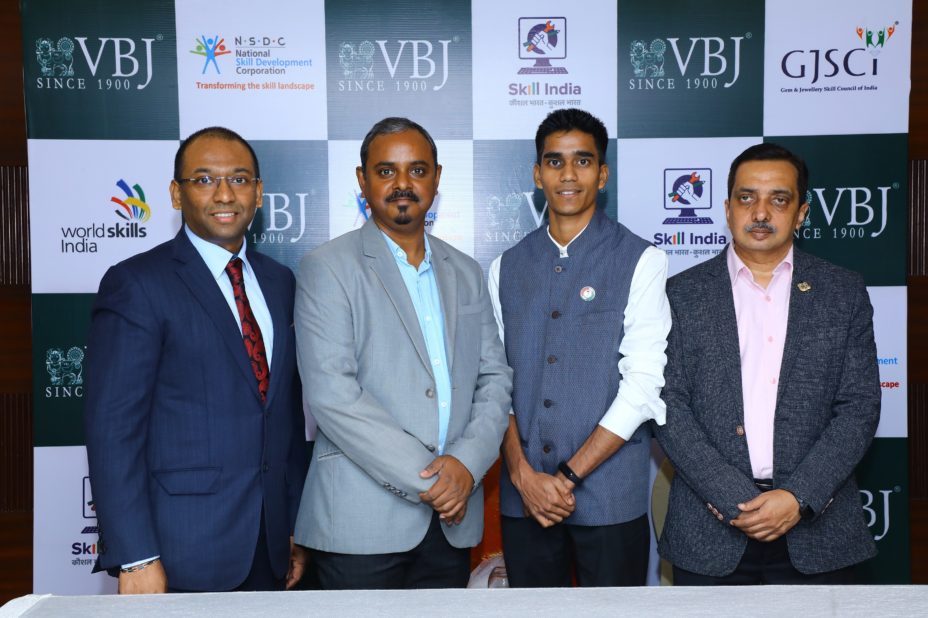 Indian contingent won four medals and 15 medallions of excellence at the world’s biggest International vocational skill competition that was held this year in Russia, taking India to the 13th position out of 63 countries that participated in the International skilling event.

Sanjoy Pramanik, who was trained at VBJ’s Creative Centre, was supported by the Gem & Jewellery Skill Council of India (GJSCI) and was part of a 48 member Indian contingent sent by the National Skill Development Council (NSDC) that took part in 44 skill segments. The team returned with a record breaking four medals – one gold, one silver and two bronze. 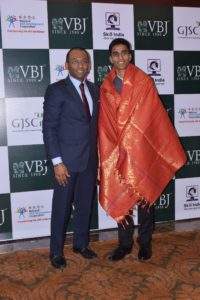 Speaking on the occasion, Mr. Rajeev Garg, Executive Director and C.E.O., Gem & Jewellery Skill Council of India said, “Sanjoy has not only brought laurels to the country but has established India on the maps of jewellery design in the world. The International World Skills forum is a prestigious platform for the youth to showcase their skill and at the same time learn new techniques and skill sets from experts from across the globe. With the support from NSDC and Vummidi Bangaru Jewellers, we are glad that we could perfect his skills in jewellery designing and manufacturing, bringing home the country’s first ever medal in the jewellery design category.”

“It is an honour to train young people at our Creative Centre. We are honoured that the National Skill Development Corporation has chosen VBJ, amongst all jewelers in the country, to train young and passionate artists who thrive to learn new techniques.” said Mr. Amarendran Vummidi, Managing Partner, Vummidi Bangaru Jewellers. “Identifying the talents and then training them in that particular specialty was a challenge. Exposing youngsters to such international platforms will make them understand the importance of developing their skills. It is an honor for VBJ’s in-house Creative Centre to be put on the World Map, for its noteworthy skill and design”

Speaking on the occasion Mr. Sanjoy Pramanik, the young champ from Chennai who won the bronze medal says, “It is a privilege to have won a medal for India and that too for the very first time. I feel honored and take this opportunity to thank the immense support of VBJ, for having given me the perfect platform to get trained and hone my skills. The guidance that was provided had brought out the best in me and helped put India among the medals in Jewellery designing and manufacturing category.”

All the Indian contestants were chosen through a grueling selection procedure comprising a series of skill competitions conducted at different levels in India. Sanjoy secured the third position putting India ahead of countries like Belguim, UK, New Zealand, Singapore, Spain, etc.

Sanjoy is the son of a farmer and was chosen to represent our country after a rigorous local selection process organized by GJSCI. He underwent training to enhance his knowledge and perfect his skills with the help and assistance of GJSCI and under the guidance of Amarendran Vummidi, Managing Partner of Vummidi Bangaru Jewellers Chennai and Anupam Karmakar, Head of Design, Development & Production, Vummidi Bangaru Jewellers. Apart from this, GJSCI, with support from NSDC, also engaged Mr. Leonardo from Brazil, a former WorldSkills winner to guide him on the minute details of his training.