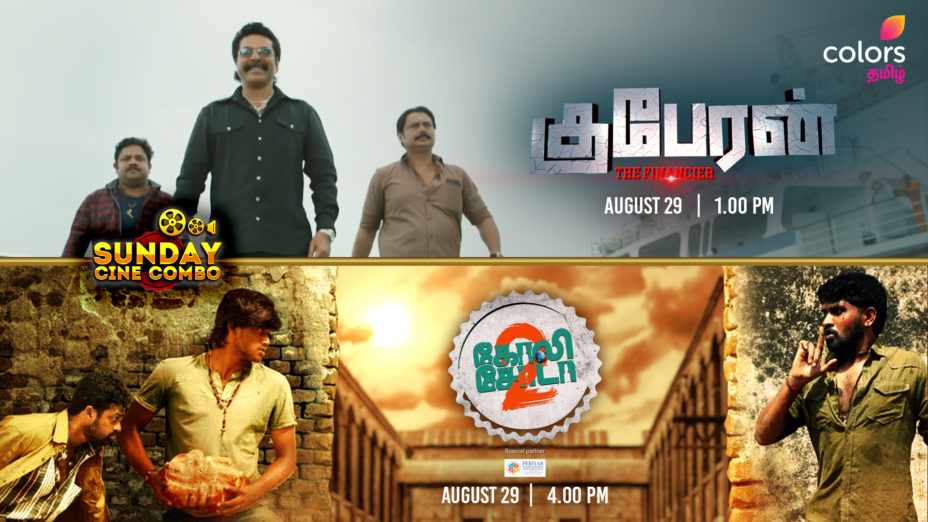 It’s a weekend packed with action and thrills as Colors Tamil, the fastest growing GEC of Tamil Nadu, brings to you the world television premieres of Kuberan and Goli Soda 2 with Periyar Maniammai Institute of Science & Technology as special partner. Screened as a part of its popular Sunday Cine Combo, these back to back blockbusters are being aired this Sunday, 29th August 2021, at 1 pm and 4 pm. The movies, with their gripping story lines and star-studded casts, are sure to keep viewers glued to their television screens.

Kuberan is a 2020 action-thriller directed by Ajai Vasudev. The film brings together Rajkiran and Meena on screen after 23 years, starring alongside Malayalam Superstar Mammootty, Kalabhavan Shajon and Siddique.  The film narrates the story of Prathapa (played by Kalabhavan Shajon), who owes money to Boss (played by Mammootty ) but refuses to pay his dues and ends up tricking him. Seeking revenge, Boss wreaks mayhem in his life. The film then unfolds the backstory of the latter and how he sets things straight with Prathapa forms the rest of the plot.

Goli Soda 2 is a sequel to the 2015 critically acclaimed film Goli Soda. An action-drama directed by Vijay Milton, it features an ensemble cast, with Samuthirakani, Gautham Menon, Barath Seeni, Esakki Barath and Vinoth in the lead roles. The film is established around ordinary men facing implausible odds. Goli Soda 2, commended for bringing in new faces, also presents eight directors turned actors, essaying  a pivotal role in the film. It revolves around Sivan (played by Vinoth) a taxi driver, Maaran (played by Bharath Seeni) a thug, and Oli (played by Esakki Bharath) an athlete who despite corrupt politicians, ruthless dons, and caste divisions, fight to change their lives for the better.

Don’t forget to tune in to Colors Tamil on Sunday, August 29th at 1 pm and 4 pm, to watch Boss exact his revenge while also getting a glimpse into how the men in Goli Soda 2 rebuild their lives. Colors Tamil is available on all leading cable networks and DTH platforms – Sun Direct (CH NO 128), Tata Sky (CHN NO 1515), Airtel (CHN NO 763), Dish TV (CHN NO 1808) and Videocon D2H (CHN NO 553). Viewers can also tune in to VOOT any time to see Colors Tamil shows at their convenience.