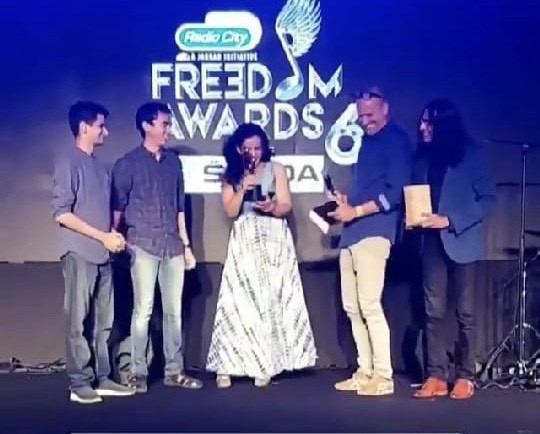 Radio City, India’s leading radio network, enthralled the indie music  enthusiasts at the magnificent grand finale night of Radio City Freedom   Awards 6, a one of its kind platform that recognizes, honors and celebrates the essence of independent music across genres and languages. Path  towards the grand finale of RCFA 6, espoused India’s indie music talent with  6 LIVE gigs across 6 cities culminating with an award night recently.

The scintillating finale witnessed some of the country’s best indie artistes  and performers from Chennai like Zingaroe and The Thayir Sadam Project,  and other performers include Sanam, EmiwayBantai and  Prateek Kuhad, Ankur Tewari bag awards and titles across jury  and popular choice categories. The astounding evening celebrated powerhouse  performances by Monica Dogra, EmiwayBantai, Antarman and DJ Pash. A marquee property, Radio City Freedom Awards once again lived up to its  repute of recognizing and celebrating talents across the Indie music  diaspora.

Radio City Freedom Awards has been fronting the indie revolution of being  a platform for aspiring musicians from all parts of the country to showcase  their extraordinary talent. The sixth season of RCFA garnered a staggering  1,200 entries across 11 categories including Hip Hop/ Rap, Folk Fusion,  Rock, Metal and Electronica in the music-based categories. As the  excitement amongst its fans reached its peak, Radio City witnessed an  unprecedented participation with overwhelming votes from indie music  lovers, which is a true reflection of their loyal fan base and the popularity  of this unique property. The non-music categories, screened by the jury  included Best Video, Best Album Art, Best Young Indie Artist, Best Indie  Collaboration and Indie-Genius: Person of the Year awards.

Amongst winners, Ankur Tewari, the man behind the music supervision of the 18-songs soundtrack from the most loved and famed film ‘Gully Boy’ bagged  the Skoda Indie – Genius: Person of the Year award. Sanam won The  Best Pop Artist (popular choice) award for ‘Itni Door’. The hip hop  sensation EmiwayBantai won the Best Hip-Hop Artist (popular choice) for  ‘Jump Kar’. Prateek Kuhad was awarded as the Best Pop Artist (Judges  Choice) and Best Video (Judges Choice) for ‘Cold/Mess’. RCFA’s checkered list  of past winners include now household names such as Divine, Benny Dayal,  Parvaaz, Swarathma, Papon, MidivalPunditz, The SkaVengers, Indus  Creed, Dualist Inquiry, Donn Bhatt, and The F16s, to name a few. Radio City  Freedom Awards has successfully been India’s only platform to pave way  for talent in the indie fraternity to create a mark in the mainstream  industry.