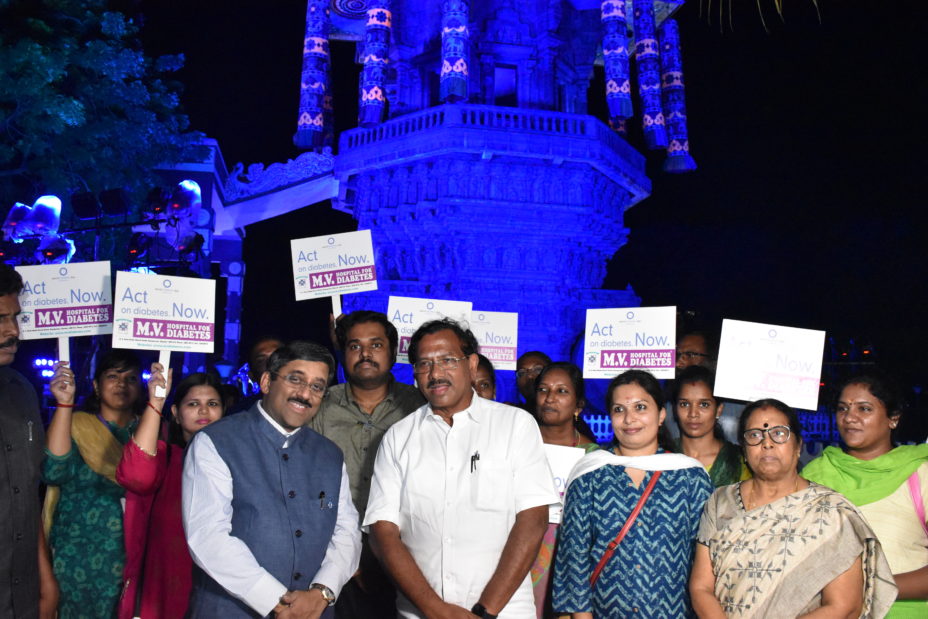 Creating a record in India by lighting Blue of various iconic buildings for the eleventh consecutive year, M.V Hospital for Diabetes, Royapuram hosted the celebration this year on the eve of World Diabetes day by illuminating Valluvar Kottam. This year the theme was to honour the uniqueness of the Tamil language and culture.

The theme of International Diabetes Federation for World Diabetes Day 2019 is ‘The Family and Diabetes’.  The aim of this year’s initiative is raising awareness of the impact that diabetes has on the family and support network of those affected, and promoting the role of the family in the management, care, prevention and education of diabetes.

According to a research, four in five parents have struggle in recognizing the warning signs of type 2 diabetes in children and one in three do not spot them at all. The symptoms is milder in Type 2 diabetes and if left unnoticed, the condition could lead to further complications like blindness, heart attack, amputations and kidney failure both in adults and children.
There are currently over 199 million women living with diabetes and this total is projected to increase to 313 million by 2040.

Carrying forward the War against Diabetes , each year on World Diabetes day, M.V Hospital for Diabetes, Royapuram chooses to light iconic buildings in blue. Accountant General Office, Queen Mary’s College, Higgin Botham’s (Books Emporium), Napier Bridge, Chennai Central Railway station, Ripon Building, LIC Building, Light house and Vivekananda House were some of the noted Chennai landmarks which were beamed blue during the past. War Memorial was illuminated last year as part of World Diabetes Day.
Valluvar Kottam, a historical monument dedicated to one of the eminent poet, philosopher and saint Thiruvalluvar was illuminated with blue lights which created a fascinating night scene and added more honor to this historic landmark.

As part of the celebrations few activities such as Oratorical Competition among college students and a Patti Mandram (Debate sessions) with renowned people in this field on ‘whether a Healthy lifestyle to prevent Diabetes is possible in the busy life people lead today’ will be lined up.