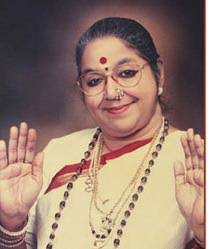 Yes, shocking, sad and unbelievable…. Poojya Sri Dr.Prema Pandurang left her kshethropasana at Sriperambudur to live in the niche she had built in the heart of Lord Krishna in Vaikunta. We have heard of the divine lives of Meera Bai and Andal Nachiar, yes, comparisons are odious; but her devotees will certainly agree that in this 21st century she relived the roles of these two bhaktha sironmanis to spread the kavyas bhakthi cult, and the intense devotion and prema for not only Sri Rama, Sri Krishna, Sri Guruvayurappa but also for the grandeur of our epics Srimad Ramayana, Srimad Bhagavatha and others like Srimad Narayaneeyam with that deep prema bhava like that of Sri Radha. She has a whole battalion of followers who were drawn to her deep bhakthi and eloquence.

A lodestar in the horizon of women Pravachanakarthas in English, Premaji as we affectionately call her, was a professor of English in the Presidency College at Madras, when the hand of providence turned the direction of her life and that was when she, with the guidance of her wise father, was made to adorn the Vyasapeetam. Then there was no looking back; she started the amruthavarshini of her discourses in English on the timeless treasures of our Hindu epics and other pearls like Narayaneeyam, Bhagavath Geetha et all. She could mesmerize her devotees with her unparalleled mastery of the English language and her impeccable use of the high style of her oratory clubbed with her deep knowledge of Sanskrit and her very deep love for our Vedic culture. Very soon she not only established a kshethra for her spiritual activities at Sriperumbudur, but slowly and steadily she became a World trotter and bhakthas started following her divine downpours just like iron filings cluster around a magnet.

Always dressed up in sparkling white saree with a touch of saffron or red, her long black and white hair woven in a single plait, this five feet VEDIC VOLCANO climbed up to the stage in a style which can be matched by no one. She carried with her a whole pooja room – her charming little baby Krishna, her favourite Hanumanji et all. We are sure that other than her audience, these deities were enjoying her kathas. And then goes her majestic metallic voice competing with the temple bells atop the 7 sacred Hills of Thirumala – “Bhimaadheera Nivaasaaya, Pandaripura Vasine…” and slowly and steadily the rest of the invocatory slokas roll on accompanied by her lively orchestra…. The galaxy of Gods march on the stage and also on the hearts of the devotees one after the other – of course climaxing with her most favourite

Narasimha avathara with thunder and lightning background from the musical artists all around … “Sthambe Sabhaayaam….. Na Mrugam, Na Manusham….” Then a deep breath and pause “Narasimha…” and believe me every one of us could see that terrible form of Narasimha in the screen of our closed eyes from which tears of Bhakthi have already started rolling … She always concludes this introductory session with none other than Hanumanji – an exemplary example of brain, brawn, power, humility and unmatchable Bhakthi for Sri Rama.

Yes, Premaji or Amma as we affectionately called her is a personification of prema bhakthi. She was an Ekalavya who had adopted Brahma Sri Sengalipuram Anantharama Dikshadar as her ‘Maanasika Guru’. Devotees used to wait for those moments when she used to imitate Dikshadar Maharaj and say “Heyyyy Guruvayurappa…” in that inimitable deep voice of the Master. Thus her presentations used to have the classic power of Shakespeare’s dramas.Born in a Marathi Madwa family, other than Sanskrit and English, she had a flair for the Hindi language too. Her lectures in Hindi drew huge crowds in the Hindi belts of India. She used to say “somehow Lord Krishna gave me songs in Hindi…” and used them as interludes in her kathas. These songs in simple Hindi were almost a confession of her personal chats with the Divine. Some may have thought that she was not in tune with the Harmonium shruthi at times. But WHO CARES. She was always in tune with Lord Krishna – in unison with divinity.

Not only this – the one and only Dr.Premaji and the one and only Bharatha Nrithya exponent Dr.Padma Subramaniam were mutual admirers. As such our Premaji had absorbed into her system and lectures many beautiful powerful nuances of the dancer’s presentations; so much so our Premaji used to sit on her Peetam and beautifully merge these in her kathas and add power to presenting Iyal, Isai, Nadagam and Natyam. Thus by adding these theatrical supplements she succeeded in making the religious impact most memorable.

She was an unofficial ambassador to the World spreading the message of our scriptures, religion and culture. Kshethropasana, at Sriperumbudur was not only the kshethra from where the prema bhakthi cult was radiated; not only did she build the Guruvayurappa and Ayappan temples there to highlight the value of worshipping Gods but the senior citizens home there and the adoption of the neighbouring villages and schools were solid examples of her spreading her prema bhakthi to humanity and society. Yes, our Premaji proved to the World that with Bhakthi one can buy the Brahmam.

Devotees cannot forget the grand spiritual celebrations at kshethropasana organised on the occasion of Amma’s 60th birthday. Amma we really wish you should have lived till your 80th year – the Sadhaabisheka, so that we could have crowned you as the unparalleled “Rajamatha of Harikatha in English” but Vitala had other plans…. He has sent the Pushpak and lifted you to his celestial abode Vaikunta, where he plans to celebrate your Sadhaabisheka and keep listening to power, packed Bhakthi kathas as his Devis Radha, Rukmini and Sathyabhama look on and how your unshakable bhakthi has bought a place for you in Lord Krishna’s heart and Vaikunta. There is a question many people ask – “can there be another Gandhi?” No is the answer in unison. Likewise we devotees ask ….

“Can there be another Premaji?” No… Never… She belongs to the class,
“Na Bhutho, Na Bhavushyathi!”
Amma I am sure you will be reading this homage from the Vaikunta and blessing all of us…
We will miss you Amma, we will miss you Amma!