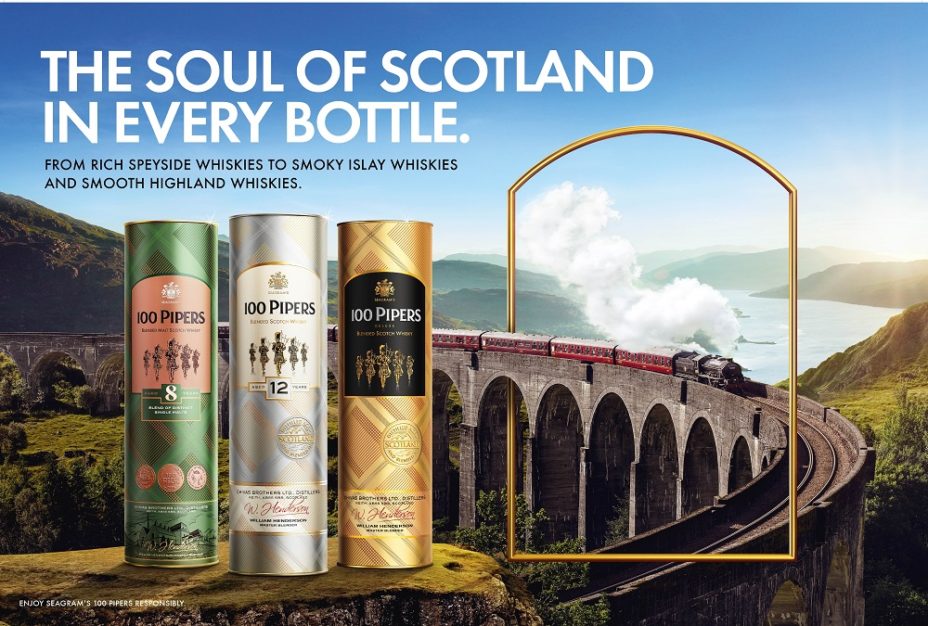 Seagram’s 100 Pipers, the largest selling Scotch whisky in India, continues to achieve bigger milestones and set new benchmarks in the industry. It has proven itself to be a market leader, thought leader & an innovation leader. In the last business cycle, Jul’20-Jun’21, 100 Pipershasbroken not one but two records.

100 Pipers became the first &only Scotch brand in India to cross1 Million+ cases mark in annual sales, twice – a solidstamp on the consumers’ love for the brand.

Adding to this success streak, the brand’s premium variant ‘100 Pipers Blended Scotch, Aged 12 years’crossed 100,000 Cases in annual sales for the first time ever since its launch in 2012.A notable performance by the aged variant– it is now the largest selling 12 Year Old Scotch in India, confirming that “Age Matters” to the discerning Indian scotch afficionado.

Asserting its dominance in the Scotch whisky market, the brandhad recently launched a new variant ‘100 Pipers Blended Malt Scotch, Aged 8 Years’. This is the first & only ‘100% Malt’ Scotchoffering in the Standard Scotch category– agame changing innovation by 100 Pipers.

With a global footprint spanning 8 countries across Asia, Europe, Africa, Middle East & South America, 100 Pipersbrings a truly international experience to the Indian consumers, with the widest rangeof unique Scotch variants. It is also the 2nd largest Scotch whisky in Asia.

100 Pipers continues to shape the Indian Scotch segment& set new records. This is driven by its increased popularity among the younger, aspirational consumerswho are resonating strongly with the brand’s purpose-led initiatives due to their uniqueness, authenticity & credibility.