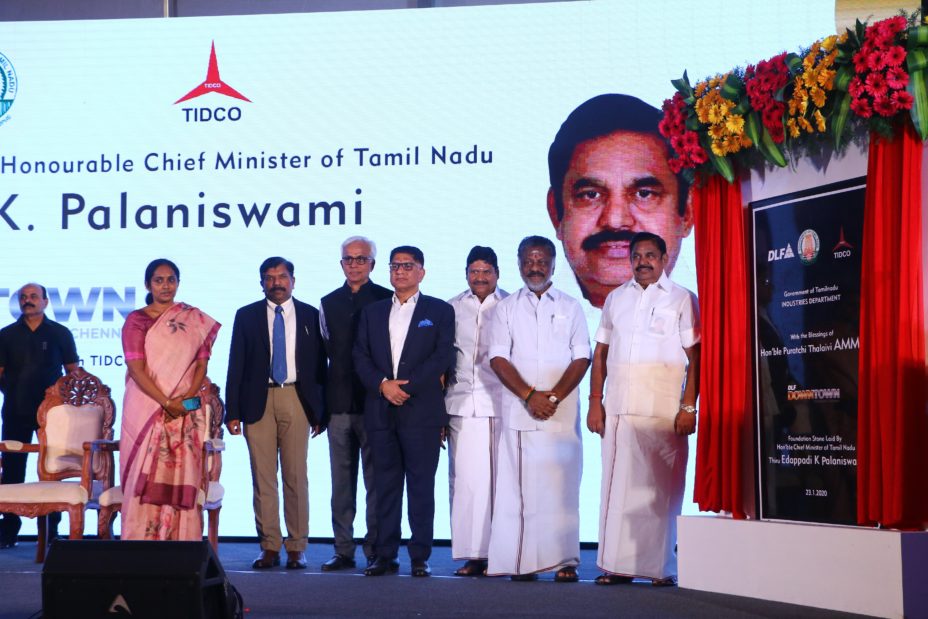 DLF, in a joint venture with TIDCO, is developing a new age commercial project, DLF Downtown Taramani. DLF Downtown Taramani is being developed as a multi-block campus development spread over 27 acres to its full potential with wide internal roads, and inter-connected office blocks at the podium level and a host of retail amenities.

The project is strategically located on the Taramani Business Corridor which has been built over time under the aegis of TIDCO. It has emerged as the preferred location for Fortune 500, Global & Indian MNC’s.

The Government of Tamil Nadu has implemented result-oriented strategies for improving governance and ease of doing business in the state which is reflective in some of its achievements. The state has topped the ‘Good Governance’ index according to data released by the Department of Administrative Reforms and Grievances, Government of India. All this has been made possible under the able leadership of Hon’ble Chief Minister, his cabinet and the administrative team. It is these reforms that have encouraged companies like DLF to continue investing in the state and growing its presence.

DLF has been present in Chennai for the last 15 years. Its landmark development DLF Cybercity Chennai in Manapakkam is the largest IT SEZ in the state and has contributed a cumulative export revenue of Rs. 66,000 crores since its inception.

Mr. Mohit Gujral, Chief Executive Officer, DLF Limited said, “Tamil Nadu has always been a destination of choice for corporates and MNCs due to its talent pool and favourable business environment. We are investing Rs.5,000 crores in phases for developing our fourth project – DLF Downtown, Taramani in Chennai.”

The company will commence construction of 2.5 million square feet of built up area in the first phase and is expected to finish the entire development on a fast-track basis, the subsequent phases will be developed over time. DLF Downtown at Taramani will add additional 70,000 direct and 6,000 ancillary employment opportunities once fully operational.

He also added, “DLF has always been at the forefront of creating futuristic sustainable workspaces by amalgamating design, architecture and technology. DLF Downtown will set a global benchmark in these areas.”

DLF Downtown has been designed for the evolving needs of the new generation. The design philosophy and master plan will focus on technology, human connect, engagement and employee mobility within the complex. The building will conform to leading environment and sustainability standards. The facility will have all modern amenities, the company has earmarked areas for F&B, retail, entertainment and wellness in the project.

Mr Khattar added “Our current annual rental revenue from DLF Cybercity Chennai is approximately Rs.500 crores, once Phase 1 of DLF Downtown is completed and operational, our stabilised rental income from Chennai will be a substantial amount.”

Speaking at the event, Mr. Amit Grover, Executive Director, DLF Offices, said, “DLF Cybercity Chennai has consistently received a great response from our clients over the years and is operating at 98% occupancy with over 50 top global and Indian companies. The 1.6 msf of new space which was added over the last two years has been entirely leased. DLF Downtown Taramani will allow us to provide expansion to our existing clients and acquire new client relationships operating in the catchment and new clients entering the city. The project will provide an aspirational and landmark development which would further help improving the position of Chennai as a global city”.

DLF Downtown will set precedence as an iconic development in the areas of safety and sustainability which are a pre-requisite for future workspaces. DLF presently has a portfolio of 30 million square feet of LEED Platinum certified workspace in the country. It is pertinent to mention that the company has set new benchmarks in the area of occupational safety and security, duly recognised by the British Safety Council which conferred it with 13 swords of honour in a single year.