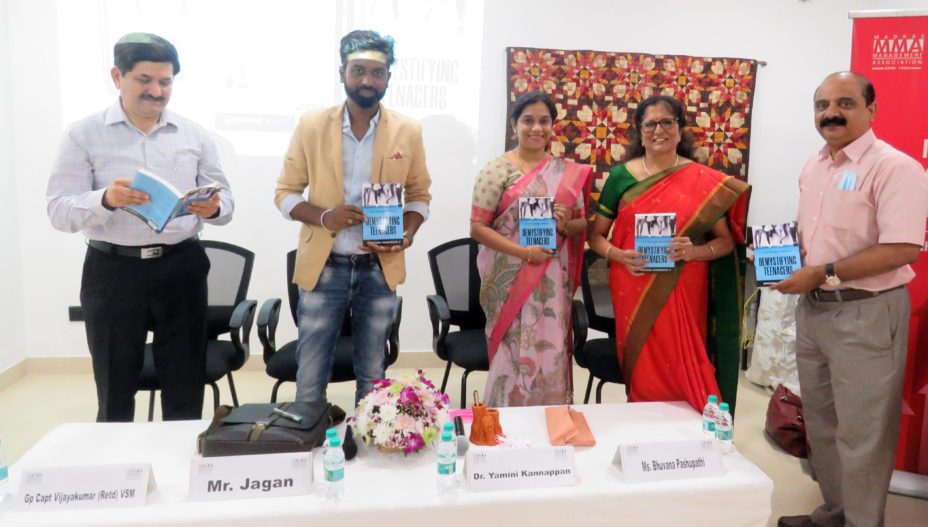 The book evaluates the range of relationship between parents and their teenage children. It emphasizes the absolute need for parents to concentrate more on teaching life lessons on communication, living a value-based life, clarity in decision making, positive attitude, empathy and much more rather than only concentrate on the academic and professional growth of their children. They should focus on the five critical aspects of a teen’s development, namely Physical, Mental, Emotional, Social and Spiritual development, It shows and tells you how to raise and guide teens through their exciting and challenging journey of physical, hormonal and emotional changes.

Commenting on the book launch, Smt. Bhuvana Pashupathi said, “I dedicate this book to my husband Late. Wg. Cdr. V Pashupathi (Retd.) VM. who had been a pillar of strength throughout my journey. This book is a culmination of my own experiences and learnings from my interactive sessions with thousands of people”.

She added, “I take this opportunity to thank my mentors Ron Malhotra along with Dev Gadhvi & Somdutt Sarkar; Mr. A Rathinaswamy (Midna Global) & Mr. Ramasubramanian (NLP) for guiding me. Special thanks to my wonderful daughters, Anuradha and Srividya and to my friends for managing the entire initiative, many people who guided me with their ideas and inputs which helped me to bring this book into a proper shape and structure”.

Shri. Jagan, Indian Film Actor said, “I am delighted to be here on this auspicious occasion, marking the launch of the book “Demystifying Teenagers” which analyses every aspect of teenage behaviour from emotional to logical. I am confident this book would be a perfect guide to all parents to build a positive relationship and face various challenges of life”.

He added, “In this fast paced world none of us of have time to spare with our children but we want our children to be a doctor, lawyer, actor and many more. Especially, current situation like covid, teenagers are stressed than ever, as a parent, I believe it’s our duty to be with our children at this stage and influence them to adopt positive behaviour, good thinking skills and the right environment to flourish”.

Smt. Bhuvana Pashupathi was born in Kolkata. She was born to Shri. Ananthakrishnan and Smt. Saraswathy. Her father was an Engineer, she has one sister and one brother. She was excellent in academics as well as extra-curricular activities.

In 1974, she married Wg. Cmdr. V Pashupathi and moved to Hashimara, North Bengal, her first station in the Indian Air Force. They have two daughters, Anuradha and Srividya. 17 years later after about 12 postings, they relocated to their hometown for their daughters’ education. It was totally a new setup for all of them, culturally, emotionally and financially. Where, she started her new innings as a teacher. While in the Air Force she taught in the Air Force Schools and Kendriya Vidyalayas, simultaneously focusing on her studies and completed B.Ed., and M.A. English.

In 1991, Bhuvana shifted to Chennai and began her second innings as a teacher in Vidya Mandir, simultaneously pursuing M. Phil in Teaching of English (PGDTE). Later, she moved to Malaysia with her husband, where she served as an English Language Faculty. After that Thailand in 2007, where she took up an assignment with the Govt University as Director of their Language Institute. In 2015, she became a corporate trainer in India and was involved in a lot of adult training programs. In 2018, she trained under Mr. Rathinaswami to become a mentor using a tool called ‘Genetic Brain Profiling”.

After completing M.Sc. Psychology, she became a counsellor and a Relationship Synergist.  Currently, she conducts parenting workshops, group online sessions, one-on-one sessions for parents as well as teenagers. She also mentors and conducts career counselling programs for adolescent children.

She has touched the lives of about 30,000 children and adult learners in her academic journey of 35 years including lower kindergarten to the higher secondary and university level. She conducted numerous adult education programs in three different countries namely, India, Malaysia and Thailand. Her family counselling sessions using the MiDNA Genetic Brain Profiling tool are most popular, she hopes to see Indian youth dominate the world in the years to come.

She dedicates this book to her late husband and parents. Through this book, she would like to create an awareness amongst  parents and encourage them to know more about the ‘brain design’ of the teenagers, and the various avenues to life that need to be mastered with proper guidance for true success and happiness…..