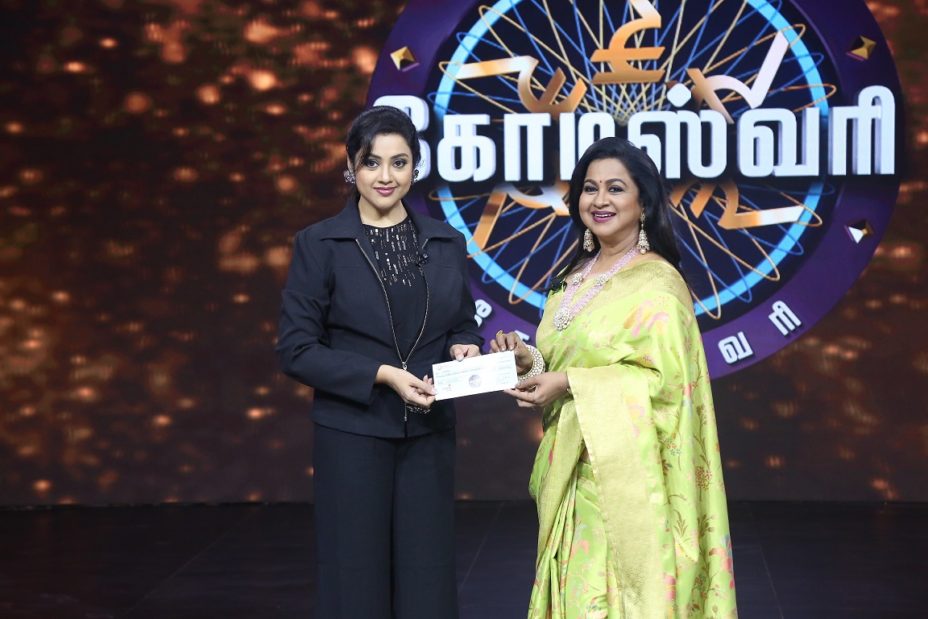 As COLORS Tamil’s Kodeeswari enters its final phase, a mega surprise has been lined up for viewers, with popular actress Meena taking the Hot Seat in her quest to empower women nationally.

The popular star, who began her long career as a child artist, promises to dazzle Kodeeswari’s fans with her quick wit and astuteness. She and hostess Radikaa left the audience in splits as they recollected tales from all the movies they had done together. Radikaa began the episode by calling her Meenu Kutti, leading to a ROTFL experience for everybody.

Meena shared how she had played the role of a little girl in a movie with Rajinikanth before she eventually became his female lead in the latter part of her career. She also spoke about her daughter Nainika who is following her mother’s footsteps as a child artist.

Meena played the game with aplomb, backed by the super confident Radikaa, in front of an all-woman audience. Unsure about one question, the actor used her first lifeline ‘Ask the Expert’ to answer ‘Which university did K Balasubramaniyam study in?’ although she was from the same university. She made it all the way to Rs. 3, 20,000, after exhausting her two other lifelines 50:50 and ‘Audience Poll’.

Meena gave a glimpse of her comeback into Kollywood, pairing with Thalaivar168 while also revealing an unknown secret of how she was not able to enjoy a normal childhood. Her small dream was to enjoy a day at the beach without being hounded by her fans. Radikaa lauded how Meena has made a mark in the industry just like she has done.

Tune in to COLORS Tamil to catch Actress Meena share more of her delightful cine experiences on February 11 at 8:00 PM.